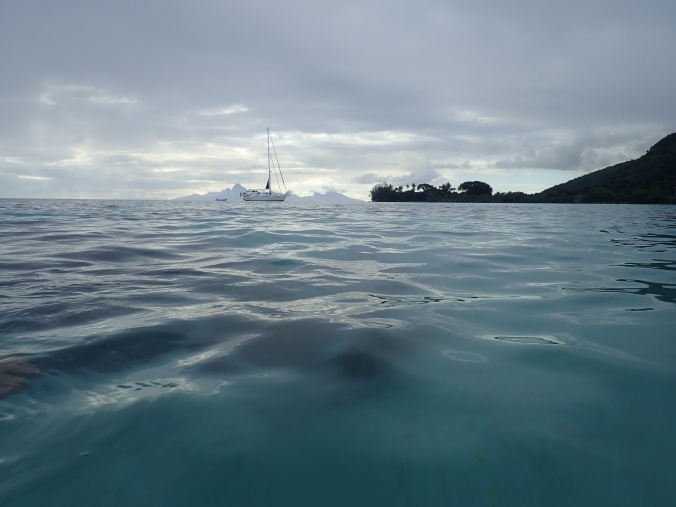 Flying Fish in the South Pacific. Alone in an isolated anchorage can be beautiful beyond words… until you become sick. Then, all a solo sailor wants is a kind word and someone to bring him a cup of tea.    Photography: ©Jeffrey Cardenas

It is not seasickness that ails me. I love the rhythm of this sailboat. And, I am not sick of the sea. I cannot imagine a more beautiful place to be than on the ocean aboard Flying Fish.

If I were onshore it would be just a routine illness, the kind that we all get from time to time, maybe more severe than usual–bronchitis, high fever, vomiting, diarrhea, and a blinding headache for hours on end. (If this is “too much information” it won’t hurt my feelings if you click off now, however, this bout of the flu or whatever it was, is relevant to the narrative of the voyage of Flying Fish.)

Onshore there are doctors and medications immediately at hand. You call in sick at work for a few days. No drama. On a sailboat, in a remote part of the world, it becomes an entirely different issue.

This 72 hours of delirium hit me like an unforecasted cyclone. I had been preparing for a departure from Neiafu, Tonga the following day. Fortunately, I was still at anchor when the illness immobilized me. I was awaken at midnight by a volcanic eruption of nasuea and night sweats. I could not even sit upright in my berth. If I had been underway navigating the reefs of Vava’u or the Ha’api islands, as I had intended, there might have been serious consequences.

Flying Fish is a thoroughbred of a sailboat. At nearly 49 feet and 16 tons this boat takes my undivided attention to keep the keel moving straight and level. She is a handful to sail alone but I am up to the task. I am not a young man any more but when I am sailing this boat I feel half my age. In nearly 10,000 miles under sail aboard Flying Fish, in all weather conditions, I have felt completely confident in my abilities to sail her singlehandedly. But, until now, I had not been sick like this onboard. This was a game-changer.

By morning, my lungs were seriously congested. It was difficult to breath. The vomiting had forced me to place a Home Depot bucket at the side of my berth. I was sweating and then freezing between convulsive waves of nausea. I stared at the ceiling of my cabin and thanked God that I was not under sail.

This is the first moment in the voyage of Flying Fish when doubt of my ability to sail long distances alone has entered my mind. Before I left the dock in Key West eight months ago, I had carefully prepared for potential accidents at sea. It was part of my risk mitigation. A neurosurgeon friend even gave me a surgical staple gun as a bon voyage gift, and a hands-on a demonstration of how to use it, if necessary. But I never considered the more mundane possibilities of just being physically sick at a time when I needed to be at my peak mental and physical capabilities.

After two days on my back, with the cabin of Flying Fish a horror show of sweat-soaked sheets, spilled bottles of over-the-counter medications, and an overflowing bucket, I finally addressed my options. There is a clinic on the island of Vava’u but at least three sailors I have spoken with who were recently attended there have contracted serious staph infections. That was not a good option to me. I almost made an “assistance needed” VHF radio called to other yachts in the area that might be listening. That would have been the prudent thing to do but I let my pride get in the way of feeling better. Being solo on Flying Fish–a big, conspicuous boat–puts out the message, “Hey, I’m tough enough to sail across oceans alone. I don’t need anyone’s help.” How wimpy would it look now to get on the radio to say, “I don’t feel very good. Can someone please bring me some chicken soup?” The irony is that nearly every boat in radio range would have responded. Cruising sailors look out for each other. It doesn’t have to be just life and death situations.

On the morning of the third day the illness was over. As I cleaned my body and boat I began to feel somewhat chagrined. Had I overdramatized a bad case of the flu? I don’t know; I’m a sailor not a doctor. At what point do severely congested lungs become pneumonic? Or a coral cut becomes a staph infection? In 1888, Robert Louis Stevenson sailed to the South Pacific on the yacht Casco, “to be far from any hand of help.” He had struggled with tuberculosis for years and had hoped the tropical sea air might heal his lungs. Four years later he was dead in Samoa at age 44.

Thus far along my journey, I have focused the risk mitigation on avoiding reefs and storms, but this little health event reminded me that I need to pay attention to the health and well-being of the pilot of Flying Fish, too. When I set sail from Key West with such ambitious plans I wanted a challenge without a lifeline. I didn’t want it all to be easy and comfortable. Now, I realize I need to learn about the physiological part of sailing alone, too. Being sick at anchor is far less serious than being sick under sail but in an odd way it has given some perspective and balance to my passage aboard Flying Fish.

I could have taken a lesson from one of my maritime heroes, Joshua Slocum, who as most sailors know was, in 1898, the first person to sail alone around the world. On his Atlantic crossing he had just left the island of Faial in the Azores and he made a supper of cheese and plums he had been given as gifts. Within hours he was on his back on the cabin floor writhing with cramps and delirious with fever. At one point he looked out of the companionway doors to see an ethereal figure at the helm steering the Spray. The figure looked at Slocum and said, “I am one of Columbus’s crew. I am the pilot of the Pinta come to aid you. Lie quiet, señor captain, and I will guide your ship tonight.”

Guardian angels manifest themselves in many ways. May all of those who sail alone have an angel looking out for them, especially when we are sick at sea.