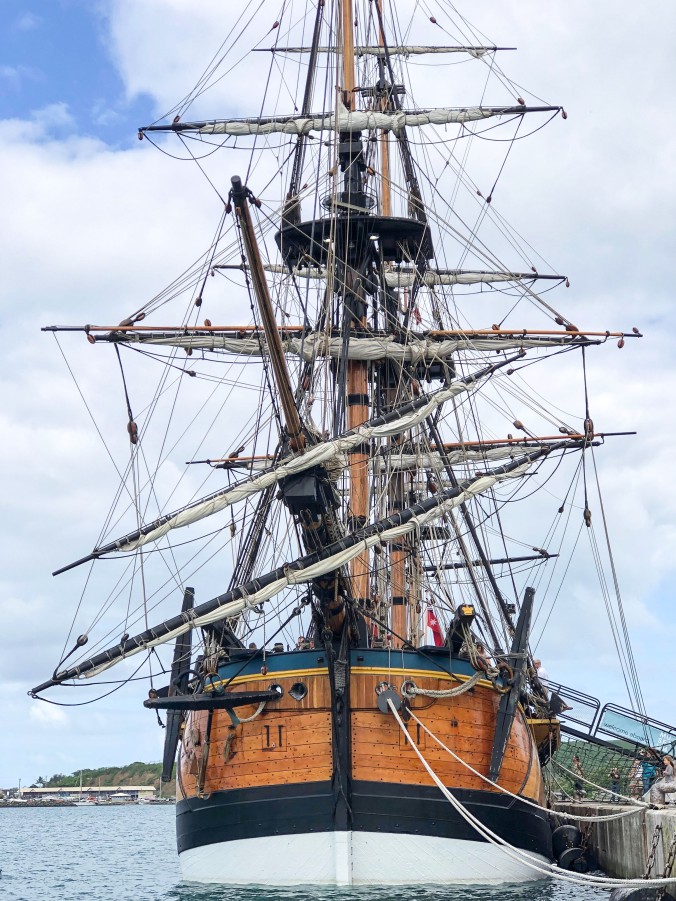 HMB Endeavour, an exact replica of the first ship Capt. James Cook commanded when he charted the Pacific, arrived in Nouméa, New Caledonia this week after having twice circumnavigated the globe. Photograph: © Jeffrey Cardenas

Walking along the wide planked decks of the Endeavour replica, one has the sense of treading two worlds.

There is this vessel, a working reproduction that recently arrived in Nouméa, a tall ship that has twice navigated the globe. And then there is the ship she represents, the HMS Endeavour, launched more than 250 years ago that carried Capt. James Cook and a crew of 94 on an epic voyage of discovery around the world.

Cook departed England in 1768, ordered to the South Seas to observe the Transit of Venus and to secretly search for the fabled Great Southern Continent (Terra Australis Incognita). The HMS Endeavour rounded Cape Horn east to west against the Roaring Forties and then sailed into the Pacific bound for Tahiti. Cook returned to England by way of South Africa after two years and 11 months, having travelled some 30,000 miles and charted over 5,000 miles of coastline.

“Cook not only redrew the map of the world, creating a picture of the globe much like the one we know today” writes historian Tony Horwitz, “he also transformed the West’s image of nature and man.”

The replica of Cook’s ship is no tourist boat. Construction of the Endeavour replica began in Australia in 1988 and the ship was launched 5 years later. Since her commissioning she has sailed over 170,000 nautical miles–more than five times the distance sailed by James Cook on the original HMS Endeavour.

The Endeavour replica was built using surveys and plans archived by the National Maritime Museum in Greenwich, England. The timbers are of jarrah, a West Australian hardwood with spars from old-growth Douglas fir. The ship’s traditional iron fittings, including lanterns and the large iron firehearth, were handmade in a specially installed blacksmith shop. Traditional manila was used for the standing rigging, handmade on a 140-year-old ropewalk to the exact specifications of the original rope. The necessary concessions to the 21st century–engines, generators, an electric galley, showers, and safety equipment–are all hidden away in the cargo hold where Cook stored his ship’s provisions.

In over 200 voyages aboard the Endeavour replica some 8,000 men and women have been able to experience 18th-century seamanship and see how Cook and his men lived. Hundreds of others have joined day sails in harbors and rivers around the world, and many more have worked as guides and volunteers.

With Flying Fish currently undergoing repairs in Nouméa, I was invited by Shipping Agent Chloé Morin to help a group of fourth graders from Nouméa’s Paul Duboisé elementary school tour the Endeavour replica. The children were wide-eyed at the 100-foot, 400-ton ship. The Endeavour was built for endurance, not speed or comfort. It  bluff-bowed and wide beamed with an average sailing speed of 2.5 knots. The ship has been described (unkindly) by one historian as “A cross between a clog and a coffin.”

Endeavour’s Master John Dikkenberg, showed off his ship with enthusiasm to the children. The two areas that most fascinated the kids, Capt. Dikkenberg said, were the sitting boards hanging outboard with holes in them used during the Cook era as toilets (from which one unfortunate seaman plummeted into the ocean while underway), and the flogging rack. “Were sailors really whipped?” one young girl asked Capt. Dikkenberg. “With a cat o’ nine tails,” he replied, and he invited a boy to spread eagle on the rack, much to the delight of his fellow students.

Capt. James Cook’s mission was a voyage of science and discovery, and his legacy continues in the voyages of the Endeavour replica. Who knows in which student this spark of adventure may eventually alight. I know as the passage of Flying Fish crosses the wake of both Endeavours that my adventure is greater for having known their stories. 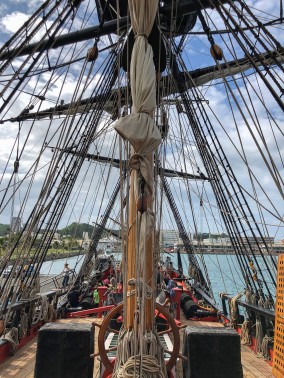 The rig of the HMB Endeavour carries over 10,000 square feet of canvas with 17 sails. © Jeffrey Cardenas

To see where Flying Fish has sailed in the past year click here: https://cruisersat.net/track/Flying%20Fish

For current weather along the route click here: https://forecast.predictwind.com/tracking/display/Flyingfish

16 thoughts on “A New Neighbor in Nouméa”